The Adapter Pattern converts the interface of a class into another interface the clients expect. Adapter lets classes work together that couldn't otherwise because of incompatible interfaces.

The Adapter Pattern is used when an existing adaptee class is needed and its interface is not the one a client needs. For this, the pattern changes an intefcace into one a client expects using a adapter class. To achieve this, there are two forms of the Adapter Pattern: object and class adapters. Class adapters require multiple inheritance. They inherit from the adaptee and the target interface, which is expected by the client. With the object adapter, the adapter implements the target interface and wraps the adaptee by holding an instance of it.

The client is implemented against the target interface and uses the adapter in the following way:

Another way to implement an adapter in programming languages that support multiple inheritance like C++ is to let the adapter class inherit both the target interface and the adaptee. This is known as Class Adapter. An Object Adapter uses composition to pass requests to an Adaptee.

The following example uses modified classes found in the example of the Strategy Pattern. Here we have the following classes. A Duck interface acting as the target interface that a client expects to see:

An implementation of this target interface is the MallardDuck:

The object that we are going to adapt, the adaptee, is the following Turkey class:

A concrete implementation of this interface is WildTurkey:

The followign main program uses adapters to adapt a Turkey to a Duck:

The adapter that is used here converts a Turkey to a Duck. Therefore it needs to implement the target interface Duck. It has a reference to its adaptee, the Turkey, which is initialized through the constructor. The class implements the methods of its target interface using the adaptee reference:

The output of the program is:

Another real-life example is to use an adapter between Java iterators and enumerators. In Java, early collection types (Vector, Stack, Hashtable, and a few others) implement a method, elements(), which returns an Enumeration. The Enumeration interface allows you to step through the elements of a collection without knowing the specifics of how they are managed in the collection.

In later versions of Java this was replaced with Iterators which has also a remove() method:

To deal with legacy code, that exposes the Enumeration interface, yet we’d like for our new code to use only Iterators.

An adapter to deal with this situation would need to implement the Iterator as its target interface and be composed with Enumeration as its adaptee:

The hasNext() and next() methods are straightforward to map from target to adaptee: we just pass them right through. The best we can do for remove() is to throw a runtime exception because Enumeration does not support removing.

The following code test the above EnumerationIterator adapter: 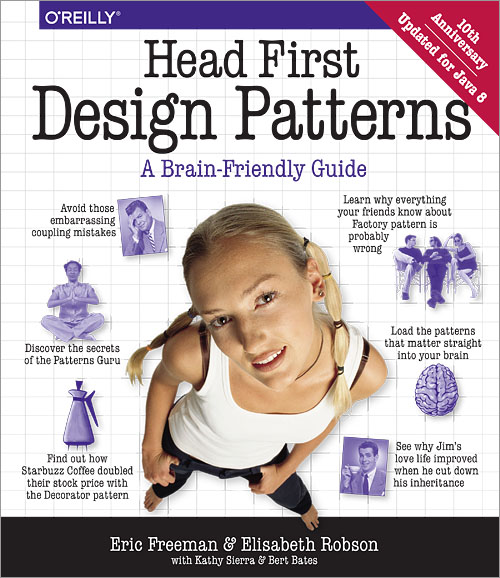 The code examples for the single patterns are from the book Head First Design Patterns and can be found on their GitHub page.